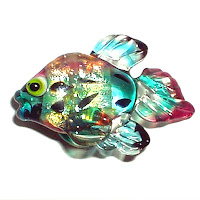 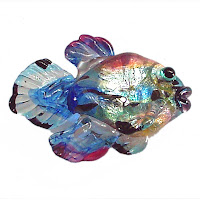 Well, I just have to show my new style of fish. Not so different than my older fish, after all, but I'm loving my new ultra clear glass. Why gelato? I can't really say- it's just that icy, airy feel that I get when I have the pleasure of eating some really good Italian gelato. And of course the glass is mostly Italian, so it just seems to fit.
Posted by glassbead, isinglass design at 2:58 PM No comments: 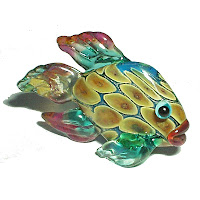 I don’t know what it is about glass fish that makes them so appealing. I’ve been making them for years, and they’ve gotten more and more complicated as time has gone by. They are probably the bead I have the most fun making, and are also one of my best sellers. Lucky me!
Why do I enjoy them so much? Hard to say, but the color play is definitely a draw. It’s fun to mess around with the colors and see what happens. It’s also a lot of fun to shape the fins and tail, though it often seems they have little minds of their own! At this point, I make three basic kinds of fish:
Little earring fish, which are the least complicated
Medium fish, which don’t have side fins, and rarely include silver
Large fish which, when I’m thinking, are a bit twisted to give them a real feel of movement, and almost always include some silver foil in the background. I know this make it sound like I have some kind of formula, but the reality is that there are rarely two that are similar, much less alike. And woe be to me if someone wants one like another they’ve seen or have. Because I rarely write down anything I’ve done, it can take me a number of tries to even get close. Recently I wanted to match an earring fish I’d already made- I ended up with another whole pair of earrings, and three others that didn’t quite match, but not the one I wanted. The pair I made sold quickly, so, while I still understood what I would need to do to match the original, I finally made the one I’d started out to make. Now I have a pair of earrings that match a fish I made a couple of weeks ago. Whew!
But the real question for me is why do other people seem to like fish so much? I have one customer who has eight or ten, and another who’s well on her way. They just can’t seem to walk by the table without seeing what’s going on in the fish department. And in my etsy shop, they are far and away my best seller. I talked to another friend, and she said she can’t keep fish in her shop. So what’s that about? Anyway, here are some pictures of a fish being made for your viewing pleasure! 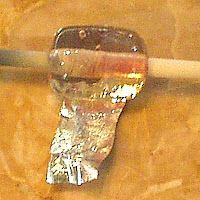 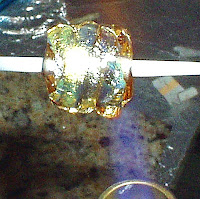 Make a cylinder and roll in pre-cut silver foil, Burnish it on, Encase in clear 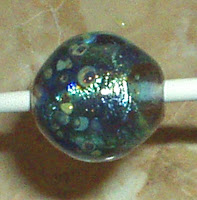 Add transparent colors, Roll in raku, Shape nicely
At this point, I've changed beads- my gas started running out, so this bit ended up as a silvery pendant. Onward! 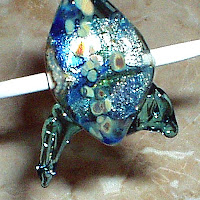 Shape and flatten, Add fins, Tail colors, Side fins too
I add multiple layers of color to the fins and tail, so I kind of go round and round with the colors at this point.

Eyes and mouth added in layers and plunged, Get out those scissors to shape and pull fins and tail, Flame anneal and check everything out. Finito!
Posted by glassbead, isinglass design at 12:35 PM 3 comments: