It's time to introduce a new 'line' of handmade lampwork beads- 'Modern Medievals.' What the heck does that mean, you may ask? This bead grouping is made up of beads that are designed using techniques that have been around for millenniums using basic tools and glass colors. These are not copies of historical finds, but rather somewhat modernized versions of these beads that will encompass some different shapes and color combinations. Here are a few examples: 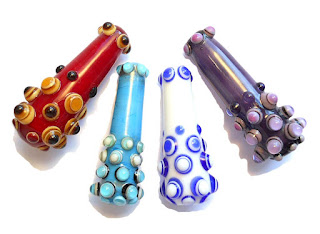 Stacked dots or 'horned' beads. This style was extremely popular during the warring states period in China. Though first imported there from countries to the west such as Egypt and Mesopotamia, the popularity of these beads encouraged the Chinese to begin making their own. These beads are made up of different colors of glass stacked one on top of the other and melted together. They have a lot of texture, which makes them a bit fun to wear. Most of the historical finds are round. My beads will encompass other shapes, like these conical beads. 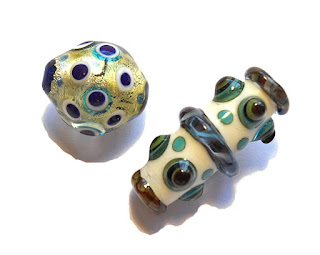 'Eye' beads are a close relative of the stacked dots; as a matter of fact, stacked dot beads are also often referred to as eye beads. In the classical version of the eye bead, the dots are melted together. The eyes can be made from just two colored dots melted together, or many. The two beads in this photo could both be considered 'eye beads', though one has raised stacked dots. In some cultures this type of bead is worn to ward off the evil eye. One of these beads has a fine silver foil core, a technique. practiced as far back as the Viking era, or about the 10th century. The other has twisted glass (twistie) decorations, a technique I have observed to be present in many ancient beads, some over 2000 years old.

Beads that have been 'feathered', 'combed' or 'raked' have also been around for a very long time. The three techniques are quite similar, using a tool or point of a glass rod to pull lines of glass laterally across the bead. Some of the beads pictured are cone shaped. These could have been used as whorls on wool spindles, or worn decoratively, or both (as some of my friends do).

The last technique I will mention here is that of folding glass. Tom and Sage Holland re-discovered the methods of making this type of bead after a lot of trial and error. An article explaining how this is done can be read in volume 29, issue 4 of Ornament magazine. I have as yet to make any of these for the 'Modern Medievals' collection, but they will be coming soon.

For more interesting information about ancient glass beads, you can search the collection at the Corning Museum of Glass , or visit the Viking Answer Lady. You can also visit my Pinterest page , Historical Glass Beads.
Posted by glassbead, isinglass design at 12:01 PM No comments: