The Glass Leaf Project- Blowing in the Wind 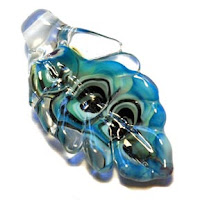 Over the years (many) I have made a LOT of lampwork glass leaves. They are pretty quick and can be a good way to try out new colors and combinations. When someone buys something online, they are likely to get a lagniappe 'lucky' leaf included (unless I've temporarily run out).

When I went to a family reunion, I made a bunch- leaves off the family tree- to give away. When I left, I forgot the leftovers in the rental car (my silly family was reticent to take more than one each). The company was kind enough to let me know and I told them to just keep them and distribute them. They probably pitched them. 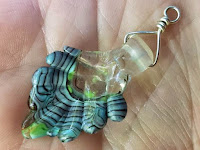 Lately I've been wondering- what happens to all those leaves? Do they get used? Worn? Given away? Put away in a dusty drawer somewhere for 'future use'? Tossed in the trash (hopefully not)? I decided it was time I tossed out some ideas of what to do with those wee leaves, so I am officially starting the 'glass leaf project' in hopes that these leaves will slowly make their way out into the world. The first leaf that officially became a part of this project was given to a well known lampworker~ he wanted to return it, but I insisted that, if he didn't want to keep the leaf, he could begin this project. So the first project leaf (in picture at right) may be somewhere out there already.

If you have a glass leaf that I made, you have just become an unwitting participant in this project. You may participate by leaving your leaf gathering dust in a drawer if that is your choice! But here are some other ideas:
* Wear it~ just put it on a cord and voila! There, that was easy
* Make something out of it- OK, that's why it's sitting in a drawer, right? Too hard!
* Give it to someone else to wear- someone who you love, someone who needs a bit of cheering up, a stranger on the street, whoever you like. No strings attached (well, you might want to put it on a cord for them). 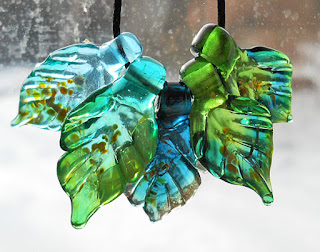 * Put it somewhere and let someone randomly find it. Maybe with a little note that says 'take me'.
* Toss it in the drink. That's right, toss it in the nearest body of water for archaeologists of the future to find. A bajillion years from now, these wee leaves could be found all over the world~ that's a fun thought. I have tossed a lot of seconds and failed beads into bodies of water along my travels~ ponds, lakes, rivers, streams, the Gulf of Mexico~ so this part of the project is already in motion.

I do hope some of you will not only participate, but also let me know where your leaf ended up~ with a picture if you like! I don't know how to do this kind of stuff, so I will direct you to a post on my facebook fan page where you can comment and share pics if desired. Or you can post pics on my personal page!

Posted by glassbead, isinglass design at 9:40 AM No comments: