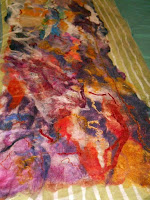 ROC day 2018 with the Black Sheep Handspinners Guild was a wonderfully fun experience here in Lansing, NY. It had to be put off for a couple of months due to the snowy winter weather, it was shorter than expected, but we managed to cram in loads of stuff! I was responsible for a quick little intro to felting workshop~ we tossed some fun bits of wool and things on a pre-felted surface, sprayed it with soapy water, rolled it up and started the felting process. After I took it home, I went to town and got it all felted together. Here I'm going to share photos of what I did and the results. The finished piece has been entrusted to another spinner who will, hopefully, show it off at the April meeting. 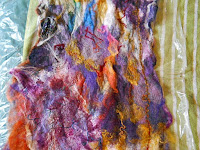 Up to the left is the piece after it was wrapped in a towel around a pool noodle and rolled about 100 times in each direction, top and bottom.

On the right, you can see how the piece has shrunk more on the far end than the closer end. At this point, the far end had been rubbed between my hands a number of times, until I could see and feel the felting happening. 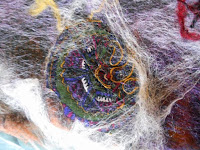 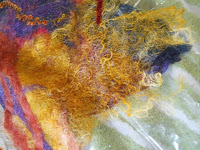 Here are closeups of some of the bits and pieces. You can see that the locks were having a little trouble sticking on and the silk needed a little extra wool tossed over it so it would stay down nicely. A little more rolling and rubbing was done to get these bits to stick down better. 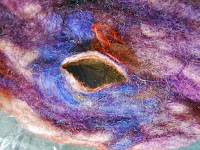 Once that step was completed, I decided to do a bit of cutting and pre-shaping. Slits were cut all along one side, while the other side was pulled into a kind of scalloped edge. The ends were pulled and rubbed between my hands into a rather random shape. 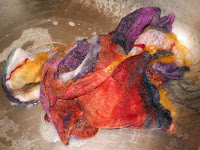 Once it all looked like it was going to stick and I could see a little shrinkage occurring, it was time for fulling to begin. I took it to the sink, ran warm water over it, added a little soap, squeezed it out and then tossed it against my steel sink about 100 times. It was put in a bath of cold water with some vinegar added to neutralize the soap, rung out again, and then thrown another 50 times or so. Now it was really shrinking up~ hooray! 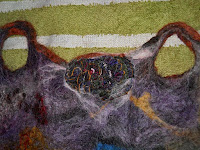 You can see on the left how the slits expanded into larger openings and the piece of silk took on some bumpy texture as the wool around and over it shrank. Another rinse in really hot water (off the stove), some rubbing and pulling into shape, and then a final rinse in cold water and it was ready to dry out. 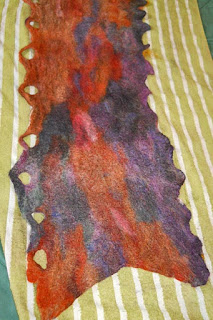 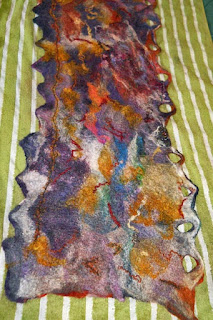 It was wrapped in a towel and gently mashed to get some of the water out, then put in the dryer for about 1/2 hour. As it was still a little damp, some last minute shaping was done and then it was hung to finish drying.

On the right is the finished piece with the side we were working on at ROC day up.

To the left is the back side of the piece- see how easy it is to make it reversible?


You can keep up with the Black Sheep on facebook!


Posted by glassbead, isinglass design at 3:24 PM No comments:

Well, I'm late to the party as usual~ it's now close to the end of National Button Week, 2018! Yup, it's a thing- who knew? It was begun in 1989 by the National Button Society and occurs in the third week of March. This year, it is from March 18-25. In honor of this, I have put my lampwork glass buttons on off 25% sale for the remainder of the week. Find them all here!

For more about glass buttons and some links to interesting button stuff, check out my earlier blog 'The Technology of a Glass Button'.

Posted by glassbead, isinglass design at 8:38 AM No comments: 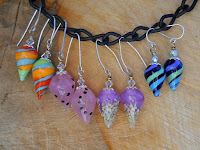 I went to the local crafty store the other day and saw an ear wire maker on clearance. I figured $13 wasn't too much to spend for something that could make my life a wee bit easier. I'm here to tell you what I think!

In general, I like it- the directions are simple and it's easy to use. It says it can be used for 20, 22 and 24 gauge wire and works well with the 20 gauge sterling silver wire I use. Since I paid just a pittance for it, I'm happy. This makes simple, basic wires, which I do use for a lot of my earrings. Here's a youtube video showing how to use this tool. And now for my list of the good and bad. 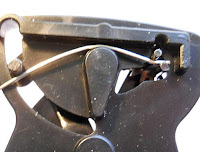 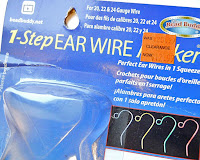 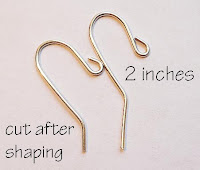 Be sure and file both ends of your wire- the loop end just to remove burrs, but the end that goes through the ears needs to be finished very smoothly. 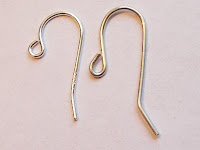 Here's how the look compares to a commercial ear wire- I like the fact that these wires are longer in the back to help counterweight the heavier glass beads and make it stay in the ear better.

Posted by glassbead, isinglass design at 11:06 AM No comments: