Those of you who pay attention to my meanderings may know that I have had a bee in my bonnet about bending beads for about a year. Though I was shown a method by what I'll refer to as the Holland clan (Tom, Sage and Beau) several years ago, I found it to be too hard and unreliable for me. That involved reheating the annealed, cleaned bead and bending it over the flame. Then I tried heating the beads to about 1250-1300 degrees in the kiln, taking them partway out and bending them- what a mess! I lost about 30%, got about 30% that were bent in a way I didn't like, and got a few that were good. Too much work for small results. A friend then loaned me a curved mandrel. I found that it was too shallow a curve, and it was hard to get my glass on evenly too. So my search continued to the lampworketc. forums. That was informative- people are trying all kinds of different things, but I still wasn't seeing anything that seemed easy and was curved enough to make a difference. 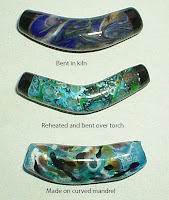 But THEN... well, I have to thank my glass fusing friend Judd. I've kept talking to him about this problem off and on for the past year, and finally the bee entered his bonnet and he decided it was time to solve my little problem for me. He made me a bead bender! Well, he actually made me three, but I already have a favorite- the one that has bead bender III engraved on the side. (Yes he even engraved these babies). I'm not gonna show you a picture of the actual bender as it's his own secret recipe and my secret weapon for the moment. But I will show you the amazing results. 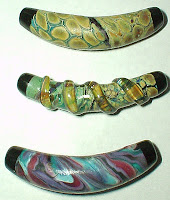 And it's SO easy to use, even for me with my kiln that doesn't have a controller. You just slam those annealed, cleaned beads on this beauty, bring 'em up to slumping temp, crash cool and re-anneal. Yes, you do have to be careful not to leave them at slumping temp for too long or they will flatten. My second batch distorted a little on the ends as I left them there a little too long- it really takes just a minute or two. I'll be running more experiments in the near future, and then, hopefully, putting some of them in my etsy shop for sale. The next bead bender Judd makes will have a few modifications, and will have a just little bit more of a curve to it.

Judd Mann is a glass fuser who makes marvelous platters and pendants; he also makes some amazing stained glass. Meet him at the River Market Farmer's Market in Little Rock, or look at a few things here: http://juddmann.com/bowls.html
Posted by glassbead, isinglass design at 8:39 AM 5 comments:

Here's a blog article about me and my beads- I am the first artist featured on the blog for the Arkansas etsy street team- AREtsy:
http://aretsy.blogspot.com/2009/02/aretsy-featured-member-glassbead.html
Posted by glassbead, isinglass design at 10:31 AM No comments: