Beads in Space- Beads of Courage, NASA, and Me

First, let me say I'm pretty excited that one of my beads was chosen to go up in the final trip of the shuttle Endeavor on April 19,2011. How did this happen, you might ask? Well, here is the story in all its glory. But first, a link and a look at all of the beads that will be joining mine:
https://picasaweb.google.com/101652927073622680837/BeadInSpace# 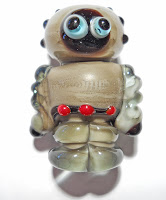 I'll just tell my side of the story. I don't know how Beads of Courage and NASA got together for this event, but I was sure glad, and lucky, to hear about it. One of my friends on facebook mentioned that she was making beads for a juried competition for glass beads to go up in the shuttle. You know how random it can be seeing what any one person is up to on facebook. I saw that and had to look into it right away. I was very disappointed when I heard about it too late the first time, so I was happy to be able to give it a try this time.
My father was a NASA engineer, so space has been on my mind for pretty well all my life. When I was growing up, space travel was still pretty new, and my father's work was leading up to the moon launch. The first clue I had that he might actually be doing something important was when I was in my late teens, and something was going wrong with one of the missions. My dad was pacing and thinking by the phone, sure that they were going to be calling him about something. I think he was a little disappointed when they didn't call.
So I got on the torch and went to work. My first series of submissions was a ufo, an alien, and a Saturn rocket ship. These beads were so hard for me to make, because they could be no larger than 1 1/4 inches in any directions- that's a little rocket! I hurried and sent them off a few weeks before the deadline,. But as it turns out, I wasn't done. For about a week, an idea kept developing- I wanted to make a man in a grey space suit with bumps along his legs and sides. But could I possibly make it so small? Finally I just had to give it a try. I made one, figured out what I could do better, made another, and crossed my fingers. I also thought I'd try a more colorful rocket if I was going to enter again. So those two and an 'earth rise' bead were my second set of submissions. The little space man is the one going into space- I'm so glad I tried again!
So, when April 19th comes along and Endeavor takes off, I'll be thinking of my dad and my mom- whose birthday is on the 20th. Dad would be so excited!!!!! Here's a link to the NASA website, where you can watch the progress of the mission:
http://www.nasa.gov/
Posted by glassbead, isinglass design at 1:53 PM 1 comment: