Around town~ a day out in Ithaca

I live (for the moment) sort of on the outskirts of a rather popular little left wing town in upstate NY. Things are happening here all day every day, most of which I ignore. Feeling a bit housebound, what with winter stretching to its sixth month, I went walk about the other day- down to the two block long pedestrian mall downtown called 'The Commons'. A few of my findings follow. 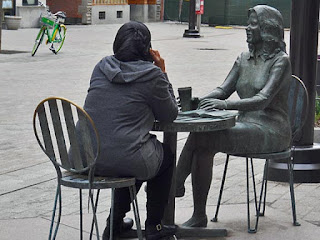 Seems like every time I walk past this wee table, someone is sharing it with the bronze gal in residence. Often they are seen talking to her or sharing a cup of joe. This woman was enjoying a chat on her mobile phone as the 'Child of Ithaca' or 'Citizen of the World' looked on.The statue is of a young local woman who died an untimely death. 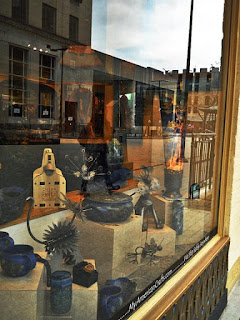 Ithaca thinks of itself as an artsy community. There are at least five shops within a two block radius that sell handmade artisan works. Four of those really concentrate on local things (Ithacamade carries a few of my beads, earrings felted bowls and scarves).

The photos I took into windows also show some of the less exciting bits of the Commons in reflection- there are some rather blocky, boring concrete structures as well as new huge buildings popping up. It's all part of the sadly necessary expansion that is happening here due to the fact that it is such a very popular place to live. That despite the weather, which is downright dreary a lot of the time- so much so that a popular local band wrote a song called 'I Live Where it's Grey' which encompasses well the feeling of a long wintry day. 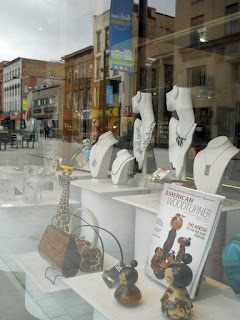 Here's another shop window reflection shot. How did those half-head props become popular? A bit spooky if you ask me!

I always want to look at these types of photos carefully and see if there are reflections of reflections involved. I loved those 'through the looking glass' pictures when I was a kid. It's  called the Droste effect.  These photos are different from those types of pictures, but there can be an element of surprise involved~  ghosts of people walking and other oddities. 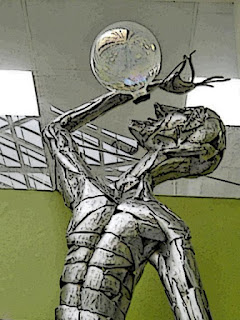 Last but not least is the statue of a bubble blower? I suppose that's what this guy is doing, though to me it looks like he's blowing a bit of glass (of course).

That's today's tour of a wee bit of downtown Ithaca '10 square miles surrounded by reality' (or so they say). I find Ithaca all too real- more on that later, I'm sure!
Posted by glassbead, isinglass design at 12:20 PM No comments: 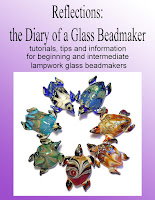 Here is an example of how to make one style of  masked beads in photos, taken from my ebook 'Reflections: the Diary of a Glass Beadmaker.' Complete instructions for these, two other masked beads styles and many other lampwork glass beads are in the book, available on etsy. 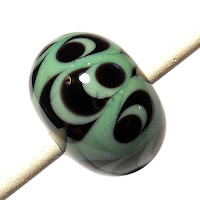 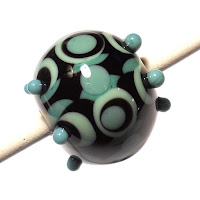 Here are a couple of other masking designs that are covered in the book.


Posted by glassbead, isinglass design at 1:57 PM No comments: