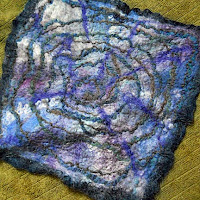 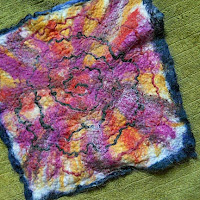 Well, weeks ago I promised to write down directions for making this type of wet felted bowl. So, finally, here we go. I'm not going to give you detailed instructions for basic wet felting here- hopefully you've got that bit down. I refer to these as 'liriodendron' bowls, named after the tulip tree or yellow poplar. 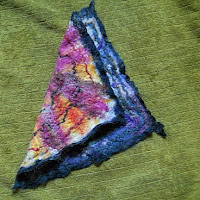 This bowl began with a couple of layers of white wool, placed perpendicularly to each other for the base. Wool was added on each side in some pretty contrasting colors. Four layers of wool were used; more would make it even sturdier. Since both colors would be seen on the finished piece, I wanted something a bit showy~ the colors are so nice and vivid when wet! Colors were added to one side, some warm water and natural dish soap was sprayed on, then it was covered with plastic and rolled flat with a pool noodle until it was sticking together well. Then it was flipped over and colors were added to the second side, another quick roll with the noodle, and then it was all wrapped around the pool noodle with a towel around it and rolled about 100 times in each direction (Roll 100 times, unwrap, turn 90 degrees, wrap up, roll again, etc. Then flip over and do it all again). At this point things should be holding together pretty well. 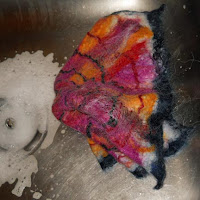 When everything looks as if it is felting together and shrinking has begun, it's time to shrink it the rest of the way. This is done in different ways by different people. Here the piece was first rubbed all over and the edges were kind of rolled and rubbed to be sure they were fairly straight and well attached, then it was rinsed in very warm water, rung out and tossed against the bottom of the sink  100-150 times. 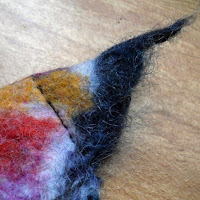 It was then rinsed in cold water with vinegar to neutralize the soap, then really hot water and then once more in really cold water. This shrinks things up a bit more. 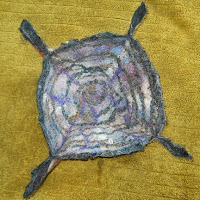 While still wet, the corners were sewn to shape the bowl. The orange and pink side is meant to be the inside of this bowl, so the seam was sewn with that side out. Seems the inside of the bowl is what will be seen most most often, so it was bright side in! This will be flipped after sewing, but for a different look, it could be left with the sewn bits sticking out.

So here it is before the flip and after. With the corners to the inside, it kind of reminds me of a tulip. 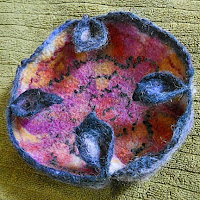 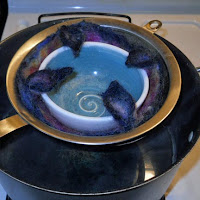 The final step is to steam the bowl into shape. A heavy pottery bowl was placed inside this bowl to shape and weigh it down, then it was placed in a strainer over a bowl of steaming water, covered and allowed to steam for a couple of hours. After drying for a couple of days, it was ready to show off!


The idea for this type of bowl came from Lark Books '500 Felted Objects'. Sadly, I don't own this book so cannot tell you the artisan's name.

Posted by glassbead, isinglass design at 3:32 PM No comments: