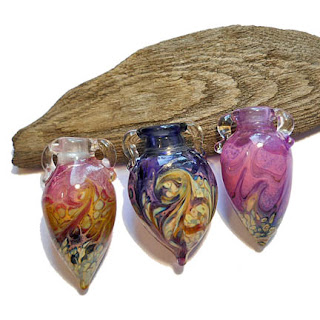 I recently had a request from my daughter for a friend of hers for a 'memory bottle' in pink and purple. I love making things in this color combo, so I jumped right in. Made three before it was all over (and I could have kept going with this for a while)! This is why, when someone asks me to do something in a particular color combo, I ask them to look through the beads I have to see if something looks about right. Or send me pictures of something in the right color, or something fas a reference point.

Because there are a lot of colors out there and many of them are swirling about in my brain all the time~ whether I have them in the form of glass rods or not...

Hope one of these is just right.

Posted by glassbead, isinglass design at 2:18 PM No comments:

Well, there are not photos of many of the steps taken to make this felted bowl, but let's see if I can explain how it all happened.

*  Lay down a piece of plastic (like a bit of drop cloth) that is large enough to wrap completely around the finished piece.

*  Cut a piece of flexible plastic stuff to act as a resist between the two sides and to build the pieces on. This was built flat and shaped into a bowl later.

* Add wool layers to the first side.
Begin with two layers of white for the background. This helps colors that will be added onto the final surface to pop.
A couple of wide lines of color that would contrast nicely with the final surface were added.  (A piece of thin foam will be placed over those areas to keep them from felting to the outer surface~ a cut will be made through one layer to the next later.)
This was all wet down, soaped and prefelted and then flipped to the other side before the final surface colors were added so that the under colors and finished design could be carried from one side to the other more effectively.

* Flip over, wrap the edges of the wool around the resist and then repeat the same process on the other side of the resist- 2 layers of white, some contrasting color and prefelt. Finish this side out by covering the contrasting color bits with a flexible resist, then add the final layer of color.


* Wet down everything by spraying with soapy   water and lightly felt by wrapping in plastic and rolling flat with the pool noodle about 50 times, covering the entire surface.

* Once all the colors are added, it's time to felt! Wrap everything carefully in plastic, keeping out wrinkles, and roll around a pool noodle, then roll a towel around the whole thing (you can also roll the towel up with the bowl for more felting friction; just be sure it will wrap all around the outside at the end).

* Felt by wrapping completely in plastic and a towel and then wrapping the whole mess around a pool noodle and rolling about 100 times in each direction. i.e. roll 100 times, unwrap, turn, wrap and roll, repeat until it has been rolled in every direction- NSEW, and then flipped and rolled all four directions again.

* Check the felting progress as you go. When the felt is pulling on the resist, it's time to remove it. Cut a small hole (about 1 inch in diameter) out of the top center. Rub around the hole to expand and strengthen it, then carefully pull (manhandle) the resist out. 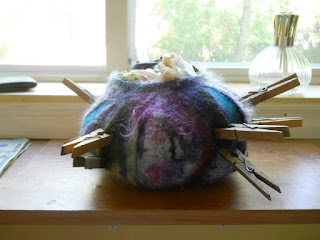 * Continue felting until everything is getting nice and firm. This can be done by wrapping and rolling for a bit longer. A piece of thin plastic (like a bag) can be placed inside just to ensure that things don't stick together where they should not. Cut carefully through the upper layer and remove the mini resists before finishing and fulling.

* Put a plastic bag inside and stuff hard with newspaper, shaping the bowl as you go. Make a few ridges and clamp with clothespins or binder clips. Take this whole conglomeration and steam over boiling water for an hour or so.

* Leave the newspaper inside and clothespins on while the bowl begins to dry. Once it is mostly dry (overnight or longer), remove everything and let it finish the drying process.

Whew! That's a lot of instructions! Hope I didn't miss anything essential.


Posted by glassbead, isinglass design at 7:55 AM No comments: