Oh my! I've gone on a murrini making binge. I bought a few from Kaz Baildon in England, but couldn't wait for them to arrive, so I got a rod nipper and began making a few of my own. Still working on making them turn out as I have envisioned them- right now, some come out quite nice and others, well, not so much. But, because I'm making them, I must also learn to use them. I have resisted this whole silly thing for more than 15 years! Now? Well, I may be getting just a wee bit addicted....


If you are not a bead maker or glass afficianado, you may wonder what the heck a murrini is. For your edification, I must, as usual, point you to the wiki about such things. One builds a tube shaped blob of glass using a lot of different colors, pulls it into a rod and then cuts thin bits off of it. These cross section pieces have sweet designs in them that get placed onto the hot bead. They can look like just about anything- the classic use is in a millefiori (thousand flowers) design, where piles of flowery-looking murrini are placed all over a piece. But a murrini doesn't have to look like a flower- it can be a fish, a heart, a star, your initials- anything, really! 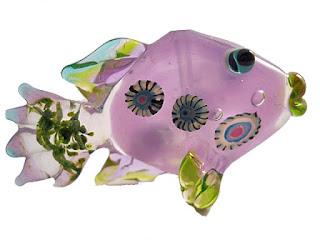 So now on to the small touch of something I think I've learned. First, in the purple fish pictured- the murrini at the bottom is encased, while the ones at the top of the bead are placed on the surface and melted in. The encased murrini was an extremely thin slice which I simply laid on my marver and picked up with the hot bead. Because it was so thin, there was no worry about it shocking and breaking. And it was easy to melt smooth and encase. A nice use of those bits that are simply too thin to pick up, and it really shows off the design nicely. 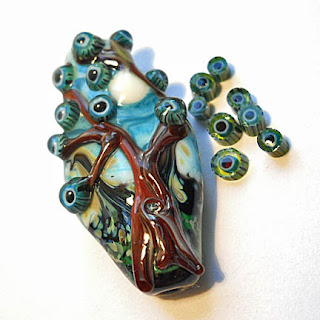 Another cool thing is the 'barnacle effect' as seen on the tree bead. As best I can remember, I did not melt these murrini all the way down, but got them about 1/2 way melted in and then  put a blob of clear on top. Not exactly what I was going for- it looks a barnacle or eye-leafed tree, but it's a fairly fun idea that could be used effectively somewhere, I'm sure! Those wee murrini next to the tree are the ones I used on it, and my favorite pull so far- modeled after peacock tail eyes.

If you are interested in learning the art of murrini making, I can highly recommend the October 2013 issue of the Soda Lime Times. I read through all the different instructions there and ended up sort of combining things together. John Rizzi did a particularly nice job with his tut! The magazine also has murrini recipes from a whole bunch of different people. I have not attempted to follow any of those, but it was great to see see what folks do!

I use just regular tweezers ('cause that's what I've got!), but I have heard that it is helpful to have either tungsten tipped tweezers (so they won't stick) or some pipe and tube or universal cylinder tweezers from Micro-Mark. I have not tried these, but folks were pretty excited about them on facebook.
Posted by glassbead, isinglass design at 8:05 AM No comments: