In defense of the hothead 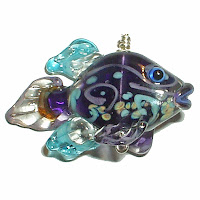 I wanted to share a bit of information and opinion on the hothead torch, which is what I use. And what, you might ask, does that mean? And furthermore, who cares? Well folks making lampwork beads care- a lot in some cases- about what kind of torch a person uses. I am not a victim of 'torch envy' (thanks for that phrase to Corinna Tettinger). I am more a believer in 'what can I afford?' and 'what works for me?' So here is my explanation of what it is, and why I use it. 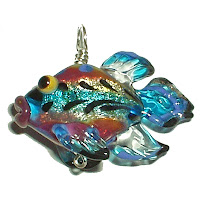 A hothead is about the lowest end torch one can effectively make glass beads with. It runs on a single fuel (I use propylene) rather than propane and oxygen. It has a rather bushy (wide) flame, and doesn't get quite as hot as a dual-fuel torch does. The flame cannot be made into a pinpoint, but it can be adjusted somewhat, especially if you are using a large fuel tank rather than those screw-on, ecologically wasteful, little bottles you can get at the hardware store. I use a large tank, and it makes an enormous difference in the heat and adjust-ability of the flame. So I definitely recommend using a larger fuel tank with a hose going to the torch.


Many people say they cannot work with this type of torch, but, frankly, a lot of them have never tried, or never tried very hard. Not that they should- they have better, nicer torches at home, and this does work a bit differently. I have even heard this referred to as not a 'real' torch. I have used this type of torch for about nineteen years, so yes, it works, it's real ( I have the burn marks to prove it!) and yes, you can do a lot with it- it just takes practice, as does using any torch.


The hothead does not get as hot as dual-fuel torches, so many folks think it is slower, but I am not really convinced of that. I have asked other beadmakers about how long it takes them to make a particular bead, and my times are usually equal to or even quicker than theirs. The first melt and wrap may go more quickly, but detail work takes time, no matter what torch you're using. And many new beadmakers have problems because their torch is turned up too high. I rarely have that problem. And, believe it or not, I actually don't usually work with my torch turned all the way up.


The hothead is an inexpensive torch- under $65, whereas dual-fuel torches start at about $170. Not really a huge difference, but there are a number of other costs that add up, the largest one being oxygen. You either have to buy a tank and transport it (which I don't want to do), or buy an oxygen concentrator, which can run quite a lot. Over the years, a dual-fuel torch might end up being less expensive, I suppose. That's some math I haven't ever done.


Lastly, I'm used to this type of torch. Yes, I can use dual-fuel torches (though I still prefer to have someone there to tell me if I have the flame right), but I'm most comfortable on my little hothead.


The one thing I don't like about my torch is that it is pretty loud. Makes listening to music hard, but not impossible. And I can't really hear the phone ring- that might be a good thing! I know I will 'upgrade' one day, but in the meantime, I am happy with my hothead.


Posted by glassbead, isinglass design at 7:24 AM 3 comments:

OK, I just have to say- I found this blog by Holly's Folly and just had to tell folks about it. Love the story, love the finished piece! Wonderful!!
http://hollysfollybeads.blogspot.com/search/label/cremains
Posted by glassbead, isinglass design at 3:25 PM 2 comments: